Why the Ending of Red Dead Redemption Still Makes Me Cry

SPOILER WARNING: As the title states, the ending makes me cry. So spoiler warning to the end of Red Dead Redemption

Red Dead Redemption was released back in 2010 to universal acclaim. The world was a vast and beautiful landscape, ranging from snow coated mountains to dry, arid deserts. The portrayal of the old west was spectacular, it felt like a world that could be lived in. Flocks of birds would fly away if you got too close, wild animals roamed the land, it even featured its own population of buffalo that you could run extinct. It didn’t stop there, the environment proved leaps and bounds above the rest of the market. It was entertaining just living in the world, getting from one side of the map to the other. But above all, the aspect that shines brighter than all others is the game’s story. Taking place back in the early 1900s, Red Dead Redemption highlights the fall of the cowboy. Industry is catching up to the west, and the rough and tumble countryside is being slowly tamed into something more hospitable to the common masses. This proves an issue to our anti hero with a dark past John Marston, as the only thing he has ever known was being a cowboy… and an outlaw. John Marston spends the entire game trying to run away from his latter life. Outlawing doesn’t support a family, and that’s exactly what John has now. Or at least he did. Right away the game shows that life isn’t looking up anytime soon. John has stumbled into a family and quit the only way of life he’s ever known. He’s pushed out into the world as a cowboy, but that world is slowly learning to leave him behind. Despite John trying to turn over a new leaf, the government isn’t too keen on letting Marston forget all his past crimes. They kidnap his family and strike a “deal.” If John hunts down all the members of his former gang, his family will be returned to him and as a bow on top of it all he will also be given a ranch to live out the rest of his peaceful life. That’s the goal of the game, something so simple. “I just want my family back.”

This is where you, the player, become John Marston. Where you experience his effort and his loss. From the get go you under stress and against insurmountable odds. But slowly you pick up your boot straps and start your quest. Despite mistakes and fumbles, you manage to find and kill all your old gang members. Each one talking about the “good ol’ days”, pleading that things didn’t have to go this way. Despite that, John is set on his task. He forces each of his old friends into a duel, a mechanic in which the world slows down to a crawl, a one-on-one fight between two individuals on a fair playing field, with no tricks or deceptions. Only the best man being the one who gets to walk away. As a staple of the Old West, it was often used to settle a dispute, and there was no better way of giving John’s old gang mates a fair shot at getting to walk away. But John had something that none of them had, something worth fighting for. And so, one by one, John slays each member of his old gang. One even decides to end himself, jumping off a cliff. The whole ordeal is heart breaking, killing old friends for a new family. 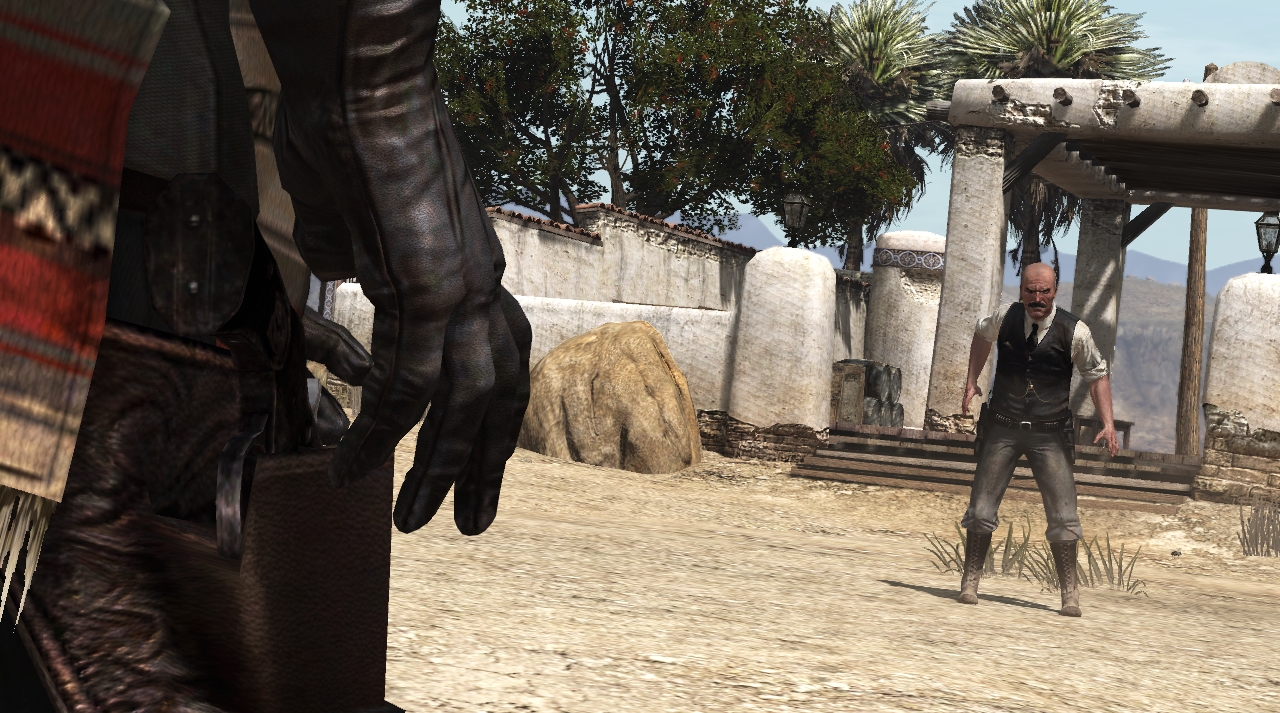 While hunting old outlaws may be the meat of the story, the heart of the it comes after. You’ve painfully brought an end to all of your former allies from your old gang, and the government comes through. Your family returns, and you come home together to your new government-funded ranch and life goes on… and so does the game. The end goal is over, but Red Dead Redemption wants to show you what you’ve worked so hard to earn by giving you small ranching missions to really introduce your family. You, the player, finally get to see what you’ve been fighting for this whole time. John’s wife, Abigail, isn’t happy. She criticizes you for leaving the family, when you were really out saving them, and complains about the new life John forged for her.

Despite this bittersweet interaction, there is a bright side to living on the ranch, learning about John’s son Jack. He’s only about 15, but he’s smart. He can read, a novelty for all but the rich during this time, he asks questions about his new ranch life, and most impressive of all is he proves proficient in blacksmithing. By learning a trade skill he can become a functioning member of the New West, something John struggled with all his life.

But there can be no loose ends…

The government blackmailed you into killing your former gang members, but after all that there is still one member remaining, John Marston. On a stormy night, goverment rangers assault the ranch. Abigail and Jack manage to escape, but John stays behind. The government rangers aren’t after them, they are after John, they are after you. With a dozen rangers surrounding you, John kicks open the ranch doors and a duel begins. But unlike the other duels you’ve been in, this one is stacked against you. In slow motion, you are given the opportunity to take aim at every foe. In slow motion the cursor crawls across the scene, marking one ranger for death and crawling to another. And in slow motion, the rangers take fire. The thunderous drumming of gunshots dominate the scene as John Marston’s body falls.

As jarring as this scene is, it’s the most powerful the game offers. For the simple reason that it let you, the player try. If John Marston had walked out, shared a few tense words with government officials and was shot down, it would have been morbid. Instead Red Dead Redemption gives an opportunity to try. This grants a sense of agency to the player. Now, it’s not John Marston who died, it’s you who died. You, the player, fought long and hard with blood, sweat and tears to earn a life with your family. And you, the player, died in sacrifice so your family can go on a live the life that you fought for.

But the game doesn’t end there. There is one more chapter. After being shot, the game fades in from black and you find that you are in control of Jack Marston, the outlaw. Having escaped from the ranch, Jack grew up to be just like his father in the worst way. Jack had a future, one where he wouldn’t have to fight and shoot his way through. But here he is. Living as an outlaw in the New West, where there is no room for him.

Red Dead Redemption sets up a world that has no good ending, but still manages to trick you into thinking one can still happen. More than once the scene could fade to black and the result would be at least bittersweet. Stop the game after the Marston family reunites and you’ll get an ending of flickering optimism. There is no room for cowboys, and there is still one left. Stop after John dies and at least his death would have been for something, ensuring his family’s future. The ending we were given shows us Jack Marston hunting down a list of men. Just like his father he will probably succeed, and just like his father he will probably die. The West wasn’t kind, and why should a story about the fall of the cowboy, starring a cowboy, be any different.